The Yoga Sūtras of Patañjali are a collection of 196 Indian sutras (aphorisms) on the theory and practice of yoga. The Yoga Sutras were compiled prior to 400 CE by Patanjali who synthesized and organized knowledge about yoga from older traditions. The Yoga Sūtras of Patañjali was the most translated ancient Indian text in the medieval era, having been translated into about forty Indian languages and two non-Indian languages: Old Javanese and Arabic. The text fell into relative obscurity for nearly 700 years from the 12th to 19th century, and made a comeback in late 19th century due to the efforts of Swami Vivekananda, the Theosophical Society and others. It gained prominence again as a comeback classic in the 20th century. 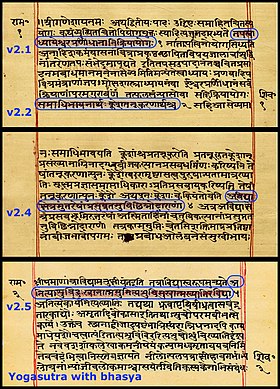 Before the 20th century, history indicates that the medieval Indian yoga scene was dominated by the various other texts such as the Bhagavad Gita and the Yoga Vasistha, texts attributed to Yajnavalkya and Hiranyagarbha, as well as literature on hatha yoga, tantric yoga and Pashupata Shaivism yoga rather than the Yoga Sūtras of Patañjali.

Hindu orthodox tradition holds the Yoga Sūtras of Patañjali to be one of the foundational texts of classical Yoga philosophy. However, the appropriation – and misappropriation – of the Yoga Sutras and its influence on later systematizations of yoga has been questioned by scholars such as David Gordon White,but reaffirmed by others such as James Mallinson.

Modern scholars of yoga such as Philipp A. Maas and Mallinson consider the Bhasya commentary on the Sutras to be Patanjali’s own, and the Sutras to be his summary of older accounts of yoga. The combined document is thus considered to be a single work, the Pātañjalayogaśāstra.